Burntwood High Street was transformed into a Push Kart track last Saturday (16th July 2016) as hundreds of townsfolk braved the unseasonal drizzly weather to see teams of 3 and 4 take to the Tarmac in their individually designed and built karts and race each other to decide the various categories that were being decided on the day.

Local heroes Craig and Chris Danby took a break from their global travels on robotic adventures to show the crowds their new robot FOXIC which will feature soon on the new series of Robot Wars on BBC2 later this month. Cllr Pam Stokes Vice Chairman of Burntwood Town Council who engaged local company KP Events to organise the event was around to give out the prizes and get showered in the champagne Grand Prix style as she handed out trophies.

The winners were Team Helmets, second were Wolf Pack and third were The Forresters.

Kevin Wilson of KP Events was delighted with how things turned out; “The weather wasn’t great but the crowds were brilliant, the teams really joined in the fun and gave them some brilliant action and above all, everyone involved really bought into what we were trying to do; provide free entertainment on a summer’s afternoon in Burntwood”. 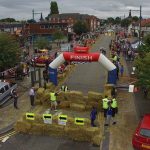 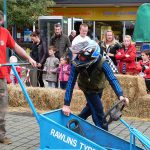 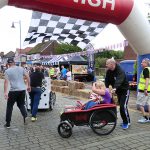 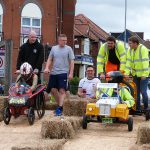 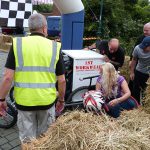 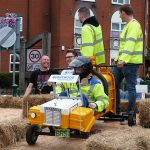 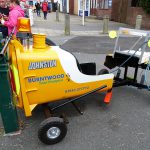 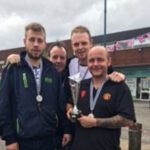